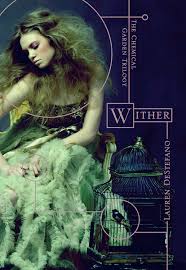 What if you knew exactly when you would die?

When sixteen-year-old Rhine Ellery is taken by the Gatherers to become a bride, she enters a world of wealth and privilege. Despite her husband Linden's genuine love for her, and a tenuous trust among her sister wives, Rhine has one purpose: to escape—to find her twin brother and go home.

But Rhine has more to contend with than losing her freedom. Linden's eccentric father is bent on finding an antidote to the genetic virus that is getting closer to taking his son, even if it means collecting corpses in order to test his experiments. With the help of Gabriel, a servant Rhine is growing dangerously attracted to, Rhine attempts to break free, in the limted time she has left.
With Wither, Lauren DeStefano has crafted an masterpiece that's achingly beautiful from cover to cover.
Wither is a YA dystopian novel that has received a large magnitude of positive hype. Well, I'm pleased to report that it more than lives up to the reputation that precedes it! I finished Wither in one night, staying up well into the wee hours of morning to complete it. It has definitely earned its rightful place on my shelf of favourites.
One of the most notable characteristics of Wither is how simply engaging it is. DeStefano's world building is spectacular - it's similar enough to our own to maintain credibility and relatability, yet distinctive enough to distinguish as a hypothetical future for humanity. The mood and atmosphere that DeStefano creates is equally remarkable - so realistic that it transcends the physical pages and printed words to seep into [the reader's] mind, to create genuine emotions, to alter the mood [of the audience]. Fictional worlds this immersive are a beautiful rarity.
And the characters - wow. DeStefano is a highly talented writer who has managed to almost breathe life into her characters. I'll let the story and characterization speak for themselves, but basically: be prepared to really connect with Wither.
Another one of the great aspects of Wither is its concept. Dystopian novels really resonate these days to begin with because they offer a safe exploration of potential futures, a medium for social satire, a vessel for outrageous speculation and prediction. Alas, not all such entities are created equal. I'm pleased to report that Wither is highly proficient such a vessel. Wither really explores deeply aspects of our humanity. What happens when science goes too far? What if you knew when you would die? What would you be willing to do to escape your "fate"?
With remarkable world-building, probing concepts and bewitching atmosphere, Lauren DeStefano's Wither is a transcendental work of art.
Posted by deltay at 3:05 PM

I LOVED Wither! I saw it on PulseIt, a site to read select S&S books every month, and didn't think much of it, but boy was I wrong! The story is spectacular; I liked how an attempt to help the human race only succeeded it helping to shorten it. Great review, you took the words to describe the book right out of my mouth. :)

Haha, pre-reading, I was the opposite - I'd been looking forward to Wither for months! Glad you chose to check it out and ended up loving it. & thanks :)

Want to tell you..
Eeer