The other morning, I tried vermicelli instant noodles for the very first time. I mean, I hadn't even realized they existed.
After a while, my mouth was pretty much numb. But they were still quite good :D Try some sometime. That reminds me, actually - quick question: is it actually true that university students consume larger amounts of instant noodles (or ramen)?

So - NaNoWriMo '08 had been for me, to put it bluntly, a pretty epic fail. (Curse you, IB!) I only managed to write on seven nights, churning out approximately 9,600 words.

And today - although I suppose this has been stewing for a while - I got the urge to resume working on this project. Which I have given the temporary working title of The Kevlar Moustache.
No, really.
Haha, don't worry, it's not about moustaches, especially ones made out of kevlar. But in all seriousness, I really do hope that this isn't just another false alarm. I mean, how many half-written stories have I started only to abandon half way through in favour of "better" ideas?
The alternating feelings of "maybe this is actually half-decent" and "who am I kidding? This is utter crap!" are really hard to keep at bay. Especially once the initial excitement, the novelty of the idea, has worn off.
For NaNoWriMo, they recommend that participants tell as many people as possible about the fact that they're trying to write a novel, sort of to provide a self-conscious sort of motivation. Well, I guess I'm telling the World Wide Web - or at least, my little corner of it, in the form of those of you who drift by ;) (Psst, if I don't mention my progress on TKM for a while, prod me about it, 'mkay?)
I also registered Absolute Write Water Cooler (http://www.absolutewrite.com/forums/) today, so hopefully that'll help too. Keep your fingers crossed guys!
Tomorrow's a new day, the start of a new month. Cheers.
Posted by deltay at 10:03 PM 7 comments:

Semi - impromptu photoshoot today, which was nice, because it gave me the illusion that I was actually getting something done rather than just chillaxing the days away until second semester starts. The concept I was going for this time was a "stationary motion - creating lines of movement through body language" type of motif. You guys be the judge: what do you think?

Some days I really wish I had models at my beck and call to work with - it does get tedious trying to be both in front of and behind the camera, at the same time. It would be so fab to get to try different angles and shutter speeds, etc. Maybe someday, right?
On another note, are these darling bubble polka-dot shorts adorable or what? Too bad it's the middle of winter and there's mountains of snow piled high outside. Which basically equates to: way-to-cold-for-shorts season. Talk about bad timing; you know that feeling you get, the craving to wear something in particular, even though the temperature/weather is all wrong for it? So beat. 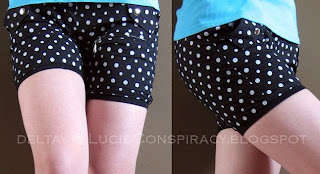 So recently I found out that The Reader by Bernhard Schlink has been made into a movie. I'd actually picked up a copy of the book second-hand at the library in early August. (Alright, alright, so maybe I'd gotten it because the cover photograph was intriguing - a sort of aged, vintage feel.) Anyway, after the move, all my books were still packed in boxes and I read The Reader and it was quite the deep, insightful read. Definitely thought-provoking. (Although I do wonder how much was lost in translation...) And better yet, Kate Winslet plays Hanna in the movie! I watched the trailer, and she isn't quite what I'd envisioned Hanna to be like (slightly more stocky, coarser hair, etc.) but it's Kate Winslet so I'm sure she's probably brilliant. Have you seen the movie yet?
Even more recently, I found out that this book is actually on the IBO's list of potential books that schools are allowed to choose! Unfortunately, mine didn't; but still, it was quite the You know you're in IB when... moment. In my defense though, I didn't know it was an IB-allowed book when I read it. ;)
In fact, I haven't done much reading at all lately. Any suggestions of recent good books?
Posted by deltay at 9:10 PM 20 comments:

The Technological Age is advancing well upon us; pretty much consuming us, really. Today, I was re-inspired to give blogging another shot. After all, second semester of junior year is about to start, which should be a time for new beginnings. (Who am I kidding? I didn't even make any New Year's Resolutions for 2009.)

Personally, I always find the first post of starting a new blog the hardest. It feels like there's this huge expansive void, like it's tethering on the edge of a revelation, like the blog could literally go in any direction. At the same time, there's this feeling that maybe there should be an introduction of some sort, to start off with. It's okay - call me old-fashioned ;) Hopefully after I get this out of the way, it'll feel more relaxed and natural. I must warn you though - I can be exceptionally random at times, and tend to ramble and rant. About the oddest things.

But to ease my conscience, I guess I'll give a brief introduction of myself.

Well. That was some introduction, wasn't it? Oh, right. I can be kind of sarcastic at times as well. ;) But then again, in this day and age, aren't we all? Quite excited about this whole ordeal, really.

Alright, alright, so maybe this isn't my first try at blogging - but you know what they say; the nth time's the charm, right? Right?! Right. It feels like it's been a numbed haze recently, so hopefully 2009 will be the year of a Lucid Conspiracy.
Posted by deltay at 8:16 PM 19 comments: