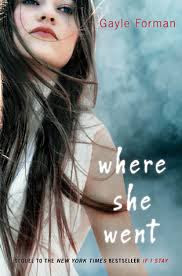 Now living on opposite coasts, Mia is Juilliard's rising star and Adam is LA tabloid fodder, thanks to his new rock star status and celebrity girlfriend. When Adam gets stuck in New York by himself, chance brings the couple together again, for one last night. As they explore the city that has become Mia's home, Adam and Mia revisit the past and open their hearts to the future and each other.

Told from Adam's point of view in the spare, lyrical prose that defined If I Stay, Where She Went explores the devastation of grief, the promise of new hope, and the flame of rekindled romance.

I reviewed If I Stay back in June, and rather enjoyed it, so it'll be great to see where the story goes next in the follow-up. This is one that's built up quite a reputation with the first book so anticipation for the second is high! Let's see how it measures up :)
*WoW is hosted by Jill over at Breaking the Spine
Posted by deltay at 10:10 AM 2 comments:

Labels: Gayle Forman, If I Stay, Penguin, Where She Went 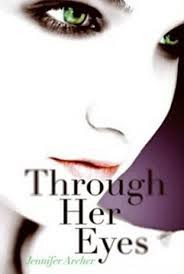 Sixteen-year-old Tansy Piper moves with her grandfather and her mother, a horror writer, to the setting of her mother's next book--a secluded house outside of a tiny, desolate West Texas town. Lonely and upset over the move, Tansy escapes into her photography and the dark, seductive poems she finds hidden in the cellar, both of which lure her into the mind and world of a mysterious, troubled young man who died sixty years earlier.

Sounds like elements of horror, which is something that's been a little lacking in the YA sphere lately. And woohoo for MCs who're into photography (e.g. Katie Alender's Bad Girls Don't Die).
What's your pick this Wednesday?
*WoW is hosted by Jill over at Breaking the Spine
Posted by deltay at 9:05 AM 1 comment:

Labels: HarperTeen, Jennifer Archer, Through Her Eyes, Waiting on Wednesday

Azalea is trapped. Just when she should feel that everything is before her . . . beautiful gowns, dashing suitors, balls filled with dancing . . . it's taken away. All of it.

The Keeper understands. He's trapped, too, held for centuries within the walls of the palace. And so he extends an invitation.

Every night, Azalea and her eleven sisters may step through the enchanted passage in their room to dance in his silver forest.

But there is a cost.

The Keeper likes to keep things.

Azalea may not realize how tangled she is in his web until it is too late.

How cool a name is Azalea? It sounds like a twist on The Twelve Dancing Princesses. Fractured fairy tales are always interesting (think Gail Carson Levine or Margaret Peterson Haddix), so it's great to see another one.
'The Keeper' sounds kind of omnious, don't you you think?
What're you waiting on this Wednesday?
*WoW is hosted by Jill over at Breaking the Spine
Posted by deltay at 10:15 AM No comments: 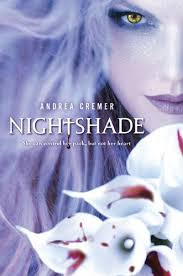 Calla Tor has always known her destiny: After graduating from the Mountain School, she'll be the mate of sexy alpha wolf Ren Laroche and fight with him, side by side, ruling their pack and guarding sacred sites for the Keepers. But when she violates her masters' laws by saving a beautiful human boy out for a hike, Calla begins to question her fate, her existence, and the very essence of the world she has known. By following her heart, she might lose everything— including her own life. Is forbidden love worth the ultimate sacrifice?
With Nightshade Andrea Cremer has created an enchanting world so similar to our own, yet so different.
Let's face it - there have been a lot of trends lately in the YA realm. Most notably, vampires, zombies, werewolves. Well, Nightshade is, in essence, a story about human-wolf beings - werewolves, if you will. Yet at the same time, it's so much more than that. In Nighshade Cremer has created an entire mythos for her werewolves - an interesting and unique mythology that's a completely fresh take on things.
Which is one of the major winning points for Nightshade. The whole concept of their packs, the hierarchies, the interactions between the different members, the backstory behind the whole thing ... it's all very unique and enticing.
However, at just over 450 pages and larger than mass market book-size, Nightshade is pretty hefty - unncessarily so, in fact. The story starts out a little slow, and it honestly feels like the tale could've been told a bit more succinctly. There are places where it drags a little and others where it's quite predictable and [the reader] figures it out, but it seems to take the characters another good ten or more pages to do the same.
It's also great to see Calla (the MC/leading lady) as a strong and capable female character. She's a pretty badass wolf and fully capable of protecting herself - the antithesis of a damsel-in-distress. However, strong feminists beware because here's where it gets a little contradictory. Calla's portrayed as a strong female, and then pages - even mere paragraphs - later, she's objectified by males, which in turn basically undermines half her characterization. With the whole 'danger allure' (like many other YA books out there these days *cough*), Nightshade doesn't exactly portray an ideal example of a healthy relationship.
In spite of all that, with great writing, unique mythology and lots of action, Cremer's Nightshade is still a highly enjoyable read. So am I planning on checking out the two follow-ups, Wolfsbane and Bloodrose? You betcha!
Andrea Cremer } { Goodreads
Posted by deltay at 12:51 PM No comments: