Now, I know there's a large portion of you among the YA blogosphere (and elsewhere) who are either aspiring writers or write as a hobby. In any case, if you fit either one of those criteria, your interest will definitely be piqued by the awesome writing contest fabulous writing duo Daniel & Dina Nayeri (Another Faust, 2009 - review can be found here) are hosting. You can find more information on this blog entry of their's, or see below for more details.

Dina and Daniel are happy to open the doors to their very first “retelling” contest!

Okay, so here’s how this works. First of all, we want EVERYONE to enter (assuming, of course, that you’re not a professional. Unpublished writers only). You don’t have to be a longtime writer, or even an aspiring writer, or a certain age or live in any particular country (this is an international contest). You DO have to write fluently in English (sorry! Though if you write in any of the languages we are trying to learn, we will read your story just for fun and practice)…

Here are the rules:

1) Write a 3000 word (max) retelling of the Faustian Bargain (”Another Another Faust”) set in any time, place, dimension, or world. Your story can be from any viewpoint, and you can get as creative as you’d like! Don’t exceed 3000 words, but don’t give us filler either. You can certainly tell an amazing story in just a few words.

3) The subject line of the email should be in all-caps “WRITING CONTEST ENTRY - JOHN SMITH.” Replace John Smith with your name.

4) Send the story to dviergutz@gmail.com by January 31, 2010. If your entry doesn’t meet any of the above rules, it will not be read!

5) Five finalists will be selected by February 28, 2010. We will post all five finalists on our website for people to admire and comment. But in the end, D&D will choose the winner. The grand-prize winner will be announced in mid-March.

Now, here’s what you’re playing for:

A signed copy of Another Faust

An author’s galley of the sequel Another Pan

(And hey, impress us, you never know what can happen!)

Best of luck to everyone who participates, and have fun!

Brought to you by Alea & Kristi, Lucid Conspiracy presents In My Mailbox #24... 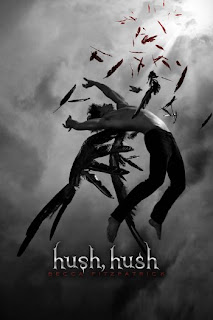 Quality over quantity, for sure! This week I got Becca Fitzpatrick's Hush, Hush, which was really exciting. For one thing, this is a book that's generated a ton of buzz lately - a lot of it extravagant praise, some of it not-so-positive. So it'll be really interesting to formulate my own opinion and see where I stand on this one. The cover image is definitely gorgeous and very striking!

So now that you've seen the contents of mine, your turn. What was in your mailbox this week?
Posted by deltay at 11:36 PM 12 comments: 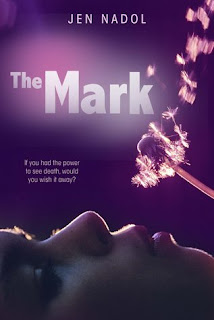 Sixteen-year old Cassie Renfield has seen the mark since forever: a glow around certain people as if a candle were held behind their back.

The one time she pointed it out taught her she shouldn't do it again, so Cassie has kept quiet, considering its rare appearances odd, but insignificant. Until she watches a man die. Mining her memories, Cassie realizes she can see a person's imminent death. Not how or where, only when: today.

Cassie searches her past, her philosophy lessons, even her new boyfriend for answers, always careful to keep her secret. How does the mark work? Why her? Most importantly, if you know today is someone's last, should you tell?

So in addition to a really awesome cover, the premise of The Mark definitely sounds very intriguing! Something about the ethical and decision aspects of this sounds a little TOK-esque, and thought-provoking is always interesting in that it pushes the envelope.

By this point, I bet you guys have perked ears as well, and are eager to learn more. Speaking of wonderful timing, the awesome Jen Nadol just so happens to have a contest going on at the moment to win an ARC of The Mark, swag, or other great stuff. Pop by here to check it out and enter!

But now that you've seen my pick, what are you waiting on, this Wednesday?

*WoW is hosted by Jill over at Breaking the Spine
Posted by deltay at 6:59 PM 4 comments: 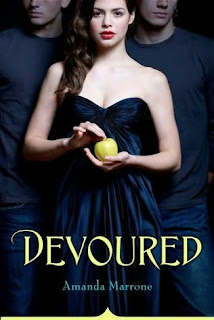 Megan’s twin sister Remy died in an accident nine years ago, and she’s been haunting her ever since. Knowing how crazy that sounds, Megan keeps this secret to herself and tries to lead a normal life. But when she takes a summer job at Land of Enchantment to keep an eye on her new boyfriend and his lovesick best friend, Samantha, she meets fellow employee Luke who can see Remy, too. Things get even twistier because Megan’s new friend Ari is sporting a massive crush on Luke, who seems to be developing a massive crush on Megan…making for a love triangle that’s positively possessed.

Megan wants to keep her distance from Luke, but when Remy’s visions get crazy violent; she knows she needs his help. Because someone’s definitely in danger...the only question is who?


With Devoured, Amanda has brought a whole new facet to the concept of the fractured fairytale - and is it ever refreshing! Disregarding the apple on the cover/spine, the lack of mention of fairytale roots otherwise might have one not even making that connection initially. And in this case, it seems to work best this way - for those who are fans of Snow White, it adds a little extra zing; for those who aren't, it still works great as a stand-alone YA paranormal/romance/mystery/and so much else.

I'll admit, the paranormal mysterious aspect of the premise is what intrigued me at first. But then, having read the book and going back to the synopsis on the back - it doesn't really do the story justice. From that description it sounds like a more contemporary type of tale, but it's really not as superficial as the middle section makes it out to be.

In the case of Devoured, I would say that incorporation was definitely one of Marrone's fortes. The way that threads of the Snow White were intertwined with the story, the way that contemporary elements were incorporated, the way that the paranormal elements were injected - it all made for a fun read. Remy's appearances and spooky prophetic warnings were definitely one of the strong points; they added suspense, spookiness, and intrigue. The only thing that could've been introduced a little more smoothly would've been one of the foreshadowing symbols, as it seems a little too sudden and hard-hitting.

Although there are tragic elements to it, overall as a novel, Devoured is a pretty fun read. And in keeping with that, most of the principal characters had interesting traits. Ari, Megan, Remy... they were all very interesting and well-portrayed. It might've been nice to get a little more insight into some of the minor characters as well though, but that's not a major factor. The pacing could have been a little smoother, but at the same time, as it is contemporary, things don't always happen on a linear, constant, timeline, so it could make sense that way. Once you get into it, the story moves along nicely though.

With an intriguing premise, beautiful incorporation of Snow White and chilling elements, Marrone's Devoured is a spooky fun read. And what great timing, especially with Halloween right around the corner?

So firstly, huge apologies for being so absent lately! School, work, extra-curriculars... it just got all really hectic all of a sudden. Basically averaging around four to five hours of sleep a night recently. But - because of Thanksgiving and all, we get Monday off, so hopefully I'll be able to pre-schedule some posts then, get caught up on the backlog of e-mails, etc. (Really sorry if you're waiting on a response - will get on that soon!) Wish me luck ;)

Now, for our regularly scheduled programming - brought to you by Alea & Kristi, Lucid Conspiracy presents In My Mailbox #23...

Super-duper excited about both of these, for a number of reasons. First off, I'd basically given up and didn't expect them to arrive at all anymore, so imagine what a pleasant surprise it was when they showed up on the doorstep! Secondly, there's been so much great feedback about both of these so far, so I'm really interested to see what I think of them as well. Furthermore, the authors of both are absolutely awesome, so all in all, it's an unbeatable combination.

Now, for some linkage for more information (because I know you're all eager to find out more):
`Beautiful Creatures
`Kami Garcia
`Margaret Stohl
`Jennifer Brown
So there's my week in a nutshell. Your turn now - what was in your mailbox this week?
Posted by deltay at 11:51 AM 7 comments:

Brought to you by Alea & Kristi, Lucid Conspiracy presents In My Mailbox #22... 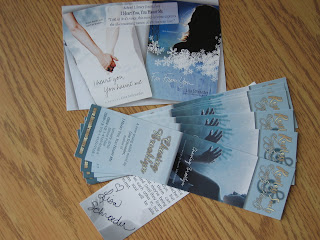 So, no books this week, but I did get a handful of Chasing Brooklyn bookmarks (all signed!) and a Far From You/I Heart You, You Haunt Me postcard (personalized & also autographed). They're all super glossy and really cool! Isn't the cover for Chasing Brooklyn just awesome? The summary sounds great as well. (It comes out January 2010 from Simon Pulse.) Thanks a bunch, Lisa and The Here, The Now, and The Books!

But now it's your turn. What was in your mailbox this week?
Posted by deltay at 12:50 PM 6 comments: