Die For Me Review 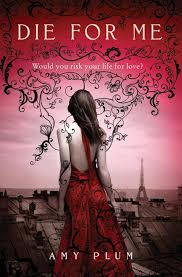 In the City of Lights, two star-crossed lovers battle a fate that is destined to tear them apart again and again for eternity.

When Kate Mercier's parents die in a tragic car accident, she leaves her life--and memories--behind to live with her grandparents in Paris. For Kate, the only way to survive her pain is escaping into the world of books and Parisian art. Until she meets Vincent.

Mysterious, charming, and devastatingly handsome, Vincent threatens to melt the ice around Kate's guarded heart with just his smile. As she begins to fall in love with Vincent, Kate discovers that he's a revenant--an undead being whose fate forces him to sacrifice himself over and over again to save the lives of others. Vincent and those like him are bound in a centuries-old war against a group of evil revenants who exist only to murder and betray. Kate soon realizes that if she follows her heart, she may never be safe again.

Amy Plum's Die for Me is a tantalizing YA paranormal romance, brimming with allure and sure to captivate the female YA market segment.

Die for Me may be Plum's debut novel, but as an author, it is clear that Plum is already quite a master. It is quite remarkable really, that Plum manages to take a paranormal element that would usually have gnarly associations and grotesque associations, and turn it into something scintillating and sexy.

And of course, the fact that Die for Me is set in romantic Paris certainly doesn't hurt. The exotic locale paired with the intriguing characters and captivating plot make for a very entrancing story.

The beginning of the novel does start a little slowly and a bit of suspension of disbelief is necessary on the part of the reader, but Die for Me is definitely well worth sticking in there for.

The chemistry between Kate and Vincent is splayed across the pages skillfully and smoothly. The mythology behind the paranormal elements is fresh and unique. And Plum's writing is beautiful to boot. This is definitely going to be an author to keep an eye out for, especially since Die for Me will indeed have a sequel!

Exotic and romantic, Die for Me is a very fresh and unique piece of YA paranormal romance.

Die for Me on HarperCollins
Posted by deltay at 2:08 PM 2 comments:

Labels: Amy Plum, Die For Me, HarperTeen, review, YA 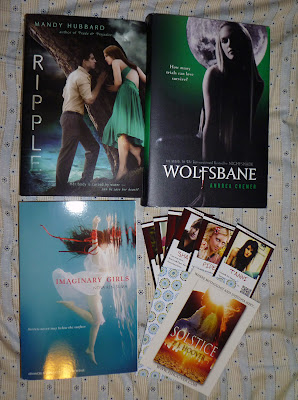 Since my last In My Mailbox post, I've received:

and a card, signed postcard, and set of trading cards for Solstice by P.J. Hoover. (Thanks!)

Imaginary Girls was reviewed here, and I reviewed Andrea Cremer's Nightshade, the prequel to Wolfsbane, here.

So there you have it, the contents of my mailbox lately. What about you, what literary goodies have you gotten?

& while you're here - don't forget to enter to win the complete Relic Master series by Catherine Fisher. Go, go, go!

*In My Mailbox is a weekly meme hosted by The Story Siren
Posted by deltay at 10:01 PM 5 comments:

Chloe's older sister, Ruby, is the girl everyone looks to and longs for, who can't be captured or caged. When a night with Ruby's friends goes horribly wrong and Chloe discovers the dead body of her classmate London Hayes left floating in the reservoir, Chloe is sent away from town and away from Ruby.

But Ruby will do anything to get her sister back, and when Chloe returns to town two years later, deadly surprises await. As Chloe flirts with the truth that Ruby has hidden deeply away, the fragile line between life and death is redrawn by the complex bonds of sisterhood.

With palpable drama and delicious craft, Nova Ren Suma bursts onto the YA scene with the story that everyone will be talking about.

Nova Ren Suma's Imaginary Girls is as mysterious as the depths of a water resevoir.

In a nutshell, Imginary Girls chronicles the relationship between two sisters, Ruby and Chloe. And what a relationship it is! Magnetic and convoluted, repelling and distorted, attractive and almost magical, their connection is like no other.

Imginary Girls is certainly a very interesting novel, you could say. It's very difficult to categorize - mostly a contemporary coming-of-age story, it has elements of urban paranormalcy and while it's not a mystery, per se, there are definitely mysterious elements to it.

There are long, lavishly looping descriptions and miniature stories within the larger framework of the present day story. For people like intricate descriptions and flowly language, Imaginary Girls may very well be a fulfilling read. (Personally, some passages got somewhat repetitive and unnecessary - ended up skim-reading a couple of paragraphs in a couple of the chapters.) In some ways, Imaginary Girls has YA content and length, but seems to be almost an MG novel stretched to fit the mold. The end of the novel felt unresolved and open-ended. Which does make it haunting, to some degree, though.

For those who are into mysterious reads with flowy descriptive writing, Imaginary Girls would definitely be one to check out.
Posted by deltay at 10:03 PM 2 comments:

The Picture of Dorian Gray meets Pride and Prejudice, with a dash of Dr. Jekyll and Mr. Hyde.

New York City, 1880. Seventeen-year-old Natalie Stewart's latest obsession is a painting of the handsome British Lord Denbury. Something in his striking blue eyes calls to her. As his incredibly life-like gaze seems to follow her, Natalie gets the uneasy feeling that details of the painting keep changing...

Jonathan Denbury's soul is trapped in the gilded painting by dark magic while his possessed body commits unspeakable crimes in the city slums. He must lure Natalie into the painting, for only together can they reverse the curse and free his damaged soul.

First off, that's a pretty striking cover, what with the framing and the lighting and the general effects. Secondly, it's YA historical with paranormal elements by the sounds of it, so it'll definitely be interesting to see how that plays out.

And the general descriptors and synopsis above - hmmmmmm!

So what're you waiting on this Wednesday?

*WoW is hosted by Jill over at Breaking the Spine
Posted by deltay at 9:10 AM No comments:

We're now well into Summer - warm weather and cool popsicles, early sunrises and late sunsets, timed yet timeless... So what better time than now for a giveaway? In collaboration with Big Honcho Media, Lucid Conspiracy is pleased to announce a contest for Catherine Fisher's Relic Master series.

About the Relic Master Series:
Welcome to Anara, a world mysteriously crumbling to devastation, where nothing is what it seems: Ancient relics emit technologically advanced powers, members of the old Order are hunted by the governing Watch yet revered by the people, and the great energy that connects all seems to also be destroying all. The only hope for the world lies in Galen, a man of the old Order and a Keeper of relics, and his sixteen-year-old apprentice, Raffi. They know of a secret relic with great power that has been hidden for centuries. As they search for it, they will be tested beyond their limits. For there are monsters-some human, some not-that also want the relic's power and will stop at nothing to get it.

RELIC MASTER is a four book series. Each book will be released over four consecutive months this summer:

Each book will include a piece of the map of Anara, the world of RELIC MASTER, on the reverse of the jacket. Collect all four books and you will have the complete map.

About the Author:
Catherine Fisher is the author of the New York Times bestselling duology Incarceron and Sapphique and in the Relic Master series has created a world equally as developed, dynamic and dangerous as that of Incarceron. Visit her at www.catherine-fisher.com.

About the Contest:
One winner will receive the complete Relic Master series - one copy of each of the four titles! Contest is open to mailing addresses in the U.S. & Canada, and will run until Wednesday, July 27th, 11:59 PM EST. Go here to enter; good luck! 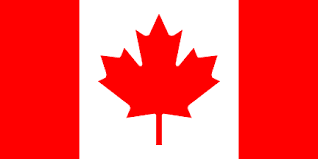