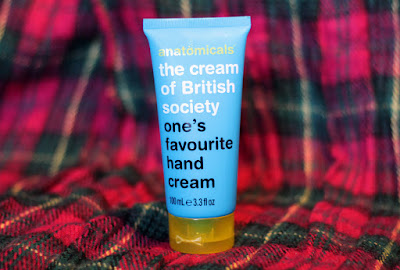 The cute blue packaging caught my eye at the store the other day so I went in for a closer look and then ended up picking one up. By the looks of it, Anatomicals is a skincare line with an edgy/slightly sardonic personality. (Their tagline is "we only want you for your body.")

This particular product is a hand cream, cheekily labeled "the cream of British society" with the subtitle "one's favourite hand cream" in a white tea scent. What's interesting is that this one appears to have been distributed by Australia (according to the back of the tube), was created in the UK, but made in the USA. Quite a globetrotter there! 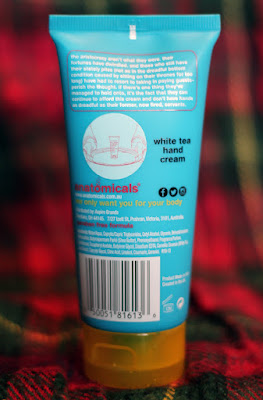 The product description gave me a chuckle too: "the artistocracy aren't what they were. their fortunes have dwindled, and those who still have their stately piles (not as in the dreadful bottom condition caused by sitting on their thrones for too long) have had to resort to taking in paying guests - perish the thought. if there's one thing they've managed to hold onto, it's the fact that they can continue to afford this cream and don't have hands as dreadful as their former, now fired, servants." (Complete with lack of capitalization and all.)

The formula is paraben-free and the scent is fairly neutral, kind of like what you'd expect a hand cream to smell like. The lotion did feel a little like it was sitting on top of the skin rather than absorbing in, but it does make your hands feel soft and doesn't leave behind any stickiness or streaks on electronics' screens, so tally this one up in the 'win' column!
Posted by deltay at 9:16 PM No comments: