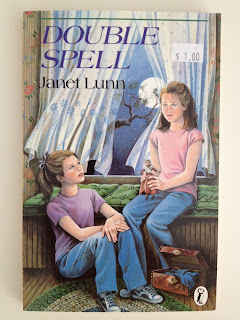 It's been a while since a lot of things. Since I've updated this blog (nearly a year!), since I've really had time to read consistently, since I've been as plugged in to the YA blogosphere.

Went for a walk with a friend one night last week, and we stumbled upon a secondhand bookstore. And then I found this gem for only $1! Double Spell by Janet Lunn, first published by Penguin back in 1968. I remembered reading this as a child (which would've been in the late '90s/early 2000s), so it was super exciting to find a copy still in really good condition and for so cheap.

So I think I'm going to try to get back into a pattern of reading frequently, one book at a time. And maybe this blog will see a bit of a revival in the coming days...

So what books from your childhood are you still nostalgic for?
Posted by deltay at 2:29 PM 2 comments: