2010 has been an amazing year of YA books, so what better way to celebrate '10 than by compiling a list of 10 top reads? Now, to be fair, I do have to add the disclaimer that the following list is comprised only of books published this past year that I've read. Doubtless there're numerous other great books out there (many of which I've been meaning to read, but haven't gotten around to yet) that aren't included. But anyway, without further ado, let's start the countdown: 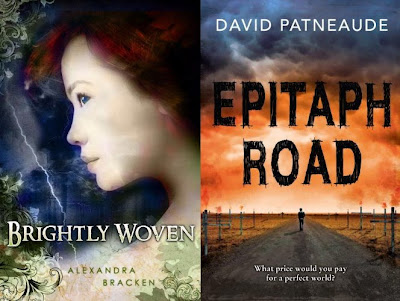 Let's go in reverse order: the nineth and tenth spots go to Brightly Woven by Alexandra Bracken (March 23rd, 2010 EgmontUSA) and Epitaph Road by David Patneaude (March 23rd, 2010 EgmontUSA), respectively. Brightly Woven had some really cool concepts and drew me back into the realm of fantasy. Epitaph Road was a very interesting take on a possible dystopian future of gender power reversal. Both are definitely very well worth reading! 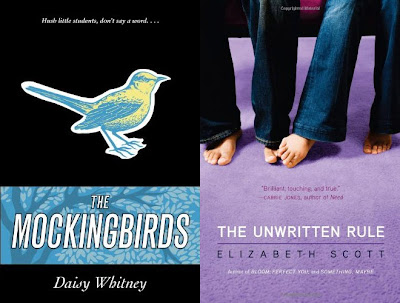 Seventh and eighth go to Daisy Whitney's The Mockingbirds (November 2nd, 2010 Little Brown) and Elizabeth Scott's The Unwritten Rule (March 16th, 2010 Simon Pulse), respectively. Both of these are contemporary YA novels that were well-written with realistic characters and credible plot lines.
--- 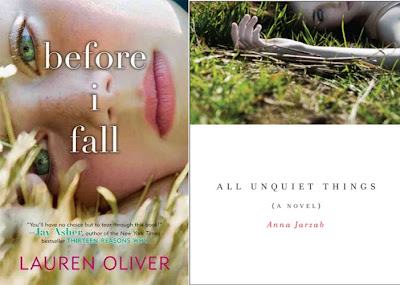 For fifth and sixth we have Before I Fall by Lauren Oliver (March 2nd, 2010 Harper Collins) and All Unquiet Things by Anna Jarzab (January 12th, 2010 Delacorte). How could I not include these two? Both are contemporaries (although Before I Fall also has paranormal facets) that deal with mortality and the aftermath. Both are beautifully written and quite thought-provoking.
--- 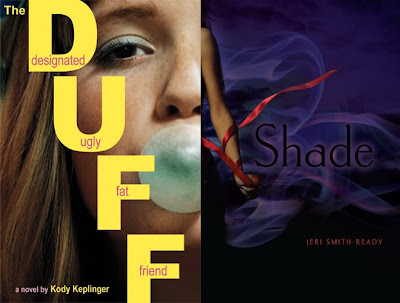 Next we have The Duff by Kody Keplinger (September 7th, 2010 Poppy/Little Brown) and Shade by Jeri Smith-Ready (May 4th, 2010 Simon Pulse). The Duff by teen author Kody is a funny and endearing contemporary novel with a very real, in-your-face attitude. Basically, it's a pretty badass read. Shade explores some very interesting concepts and creates an intriguing paranormal world very much like our own, yet quite different.
--- 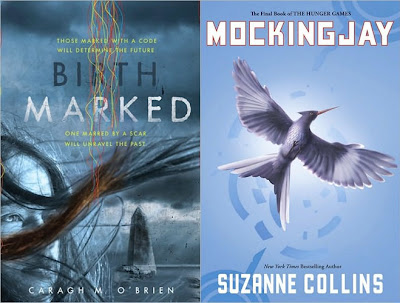 My top two picks for 2010 probably really won't come as a surprise. We have Birthmarked by Caragh O'Brien (March 30th, 2010 Roaring Brook Press) and Mockingjay by Suzanne Collins (August 24th, 2010 Scholastic). Mockingjay... well, it's Mockingjay. Enough said. Birthmarked - well, we all know I've been gushing about this one a ton lately. It's dystopian (love!) and it's got great characters, a strong female protag, a juicy love interest, and a fast-paced, action-packed, exciting plot line. It's also great that there's more of a science element (hence science fiction, right?) in this one than some of its colleagues. There's something more educated about the writing, which is also great. Plus it was a ton of fun to interview Caragh earlier this year as well.
And there we have it - a spotlight on some of the best YA books of the year. What made the cut for your list this year?
Posted by deltay at 12:31 PM No comments:

When Sam's best friend gets her first boyfriend, she's not ready to spend the summer listening to the two of them call each other "pookie." Sick of being a third wheel, Sam applies to be a counselor-in-training at Whispering Pines camp in the New York Catskills. But what she doesn't realize is that it's not going to be all Kumbaya sing-alongs and gooey s'mores. If Ashley, the alpha queen of Whispering Pines, doesn't ruin Sam's summer, then her raging crush on the surfer-blond and flirtatious Hunter just might. At least she has playful Cole, who's always teasing her, but is oh-so-comfortable to hang out with, and the singular gang of girls that become fast friends with Sam-they call themselves the Sleepaway Girls.

With Sleepaway Girls Jen Calonita has crafted a fun and entertaining read.

Sleepaway Girls is a YA contemporary with the typical cast of a bunch of girls and a couple guy love interests - so of course drama ensues. Unlike some of its Gossip Girl-esque counterparts though, the ones here are a little more real. With less focus on the materialistic (it takes place out in the boonies!), there's more room to focus in on the characters.


It's great to see each character have distinctive attributes which makes every single one unique. Sam's little quirks and imperfections make her more endearing. Her interactions with the guys are fairly adorable as well.


One small caveat though - at times the fact that this YA book was written by an adult does come through - both in terms of voice (just here and there, little spots) and in terms of message. The "moral" of the story is pounded in a little too hard at the conflict resolution, and honestly, the way it's resolved does feel a little cliche and loses a bit of credibility for the lead-up as well.


In Sleepaway Girls, Calonita has created a fun summer world with interesting characters. A great read for the beach or those cold Winter nights spent reminiscing about summer.

Goodreads } { Jen Calonita
Posted by deltay at 2:35 PM No comments: 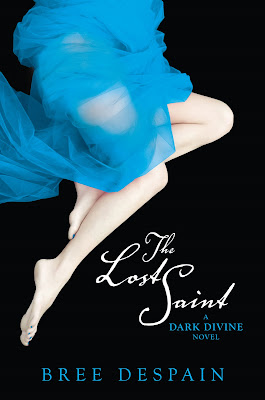 The non-stop sequel to The Dark Divine delivers an even hotter romance and more thrilling action than Bree Despain's first novel. Grace Divine made the ultimate sacrifice to cure Daniel Kalbi. She gave her soul to the wolf to save him and lost her beloved mother. When Grace receives a haunting phone call from Jude, she knows what she must do. She must become a Hound of Heaven. Desparate to find Jude, Grace befriends Talbot - a newcomer to town who promises her that he can help her be a hero. But as the two grow closer, the wolf grows in Grace, and her relationship with Daniel begins to crumble. Unaware of the dark path she is walking, Grace becomes prideful in her new abilities - not realizing that an old enemy has returned and deadly trap is about to be sprung. Readers, raveous for more Grace and Daniel, will be itching to sink their teeth into The Lost Saint.

I reviewed The Dark Divine last year (in December - has it really been a year already?!) and rather enjoyed it, so it's definitely exciting that the sequel, The Lost Saint, will be released in about a week.
The two covers complement each other very nicely. Actually, both covers are absolutely gorgeous.
So there you have it - my pick of the week. How about you, what're you waiting on this Wednesday?
*WoW is hosted by Jill over at Breaking the Spine
Posted by deltay at 2:06 PM 1 comment:

When Holly loses her virginity to Paul, a guy she barely knows, she assumes their encounter is a one-night stand. After all, Paul is too popular to even be speaking to Holly, and he happens to have a long-term girlfriend, Saskia. But ever since Holly’s mom died six months ago, Holly has been numb to the world, and she’s getting desperate to feel something, anything—so when Paul keeps pursuing her, Holly relents. Paul’s kisses are a welcome diversion, and it’s nice to feel like the kind of girl that a guy like Paul would choose.

But things aren’t so simple with Saskia around. Paul’s real girlfriend is willowy and perfect… and nothing like Holly. To make matters worse, she and Holly are becoming friends. Suddenly the consequences of Holly’s choices are all too real, and Holly stands to lose more than she ever realized she had.

Lauren Strasnick's Nothing Like You is a fast and entertaining read.

At a mere 209 pages, it really flies by in comparison to many of the other YA titles out there these days (which tend to be a fair bit more lengthy). There's something really refreshing about it - after all the hefty tomes, it's nice to have a shorter story - or, as Deb Caletti puts it, "candid".

Overall, it's an enjoyable story. Holly, Nils, Saskia, etc. are all rather interesting characters in their own right, and it was definitely fun to read about people who're quite different from [oneself]. Unfortunately, Paul (in particular) and the others to some degree as well, fell a little flat. The book could've been a bit lengthier if the added text were properly used to flesh out the characters a little more.

At times a little bit of incredulity about Holly's motivations did play an issue in regards to the credibility of the story. Strasnick does have an interesting writing style that engages the reader though.

All in all, although a little lacking in the character depth department, Nothing Like You by Lauren Strasnick is still a fun, quick and entertaining read.

Posted by deltay at 6:34 PM No comments:

Labels: Lauren Strasnick, Nothing Like You, review, Simon and Schuster

*In My Mailbox is a weekly meme hosted by The Story Siren
As I've mentioned a few times previously, I've been attending university out of town for the past few months. When I arrived back home a few days ago, there was mail waiting for me, yay!
Mercy by Rebecca Lim had come during my absence, which was a very pleasant surprise. I also had a couple of magazines (Flare and What If? - in which one of my photographs was published). (Hey, don't judge me, okay? I get Canadian Business magazine delivered to my dorm, so I'm not a total bimbo or anything ;)
But yep, lots to get caught up on. So what's been in your guys's mailboxes lately?
Posted by deltay at 9:37 PM 2 comments:

Labels: Flare, HarperTeen, In My Mailbox, magazine, meme, Mercy, Rebecca Lim, What If?

Hey all, first off -
Huge apologies that I've basically been MIA from Lucid Conspiracy. First semester of college/university has been absolutely insane (but also absolutely ah-mazing). Alas, it didn't leave a lot of time for blogging. I still don't feel ready to let [the blog] go yet though. So, good news is that I'm now home for the Winter holidays, which means it'll hopefully give me a chance to get caught up on blogging (and hopefully pre-schedule numerous posts into the new year, if all goes well :)
For the pending reviews, posts, etc. really sorry about the delay and all, and keep your eyes peeled as those come up over the next few days! :)
So... what have I missed in my hiatus from the YA blogosphere?!
Posted by deltay at 7:14 PM No comments: