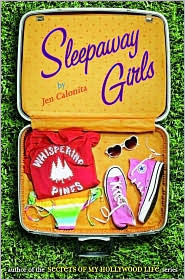 When Sam's best friend gets her first boyfriend, she's not ready to spend the summer listening to the two of them call each other "pookie." Sick of being a third wheel, Sam applies to be a counselor-in-training at Whispering Pines camp in the New York Catskills. But what she doesn't realize is that it's not going to be all Kumbaya sing-alongs and gooey s'mores. If Ashley, the alpha queen of Whispering Pines, doesn't ruin Sam's summer, then her raging crush on the surfer-blond and flirtatious Hunter just might. At least she has playful Cole, who's always teasing her, but is oh-so-comfortable to hang out with, and the singular gang of girls that become fast friends with Sam-they call themselves the Sleepaway Girls.

With Sleepaway Girls Jen Calonita has crafted a fun and entertaining read.

Sleepaway Girls is a YA contemporary with the typical cast of a bunch of girls and a couple guy love interests - so of course drama ensues. Unlike some of its Gossip Girl-esque counterparts though, the ones here are a little more real. With less focus on the materialistic (it takes place out in the boonies!), there's more room to focus in on the characters.


It's great to see each character have distinctive attributes which makes every single one unique. Sam's little quirks and imperfections make her more endearing. Her interactions with the guys are fairly adorable as well.


One small caveat though - at times the fact that this YA book was written by an adult does come through - both in terms of voice (just here and there, little spots) and in terms of message. The "moral" of the story is pounded in a little too hard at the conflict resolution, and honestly, the way it's resolved does feel a little cliche and loses a bit of credibility for the lead-up as well.


In Sleepaway Girls, Calonita has created a fun summer world with interesting characters. A great read for the beach or those cold Winter nights spent reminiscing about summer.