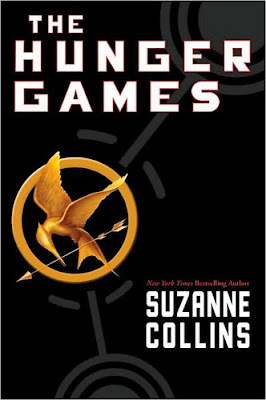 Disclaimer: I have noticed that there tends to be a slight lag time between my finishing a book and typing up a review - mostly because it's easier to be objective after some distance from initial impressions. I may come back and make slight changes to this, as it's been mere hours since finishing THG.

Literally, I must be among one of the last in the blogosphere to read The Hunger Games, so originally I hadn't been planning to write a review. But. After I broke down and picked up a copy at Chapters - and devoured it - I just had to write some thoughts down. Bear with me if it's a little incoherent, as it's more of a ramble of contemplations than an actual review. We'll call it a pseudo-review.

Firstly, Suzanne Collins's The Hunger Games is an absolutely breathtaking masterpiece. I seem to be on a bit of an dysfunctional futuristic sci fi rampage these days, what with reading Anthem, The Chrysalids, and researching 1984, Brave New World, and the like. And The Hunger Games completely blew me away with its originality. That's not to say every single concept was entirely unheard of previously (hearing the premise before reading, it reminded me of Gloria Skurzynski's The Virtual War Chronologs), but the execution was definitely Collins's own.

The voice was excellent. It was distinctive, wry at times, with dispersed bits of dry humour - which is quite the feat, considering the fact that this is a book about survival by killing other kids your age. The tense - present - was barely noticeable. In fact, half the time, it was like the words fell away and the immediacy offered just brought the reader that much closer to Katniss because of the barely noticeable tense. I mean, with most books, on some level you're aware that you're simply reading the story. But with The Hunger Games, there were moments where the words just fell away and it was like actually being immersed in the story. And the flashbacks! Wow - incorporating backstory like that, in such a form, without making it seem like an infodump - that in itself is a huge accomplishment, which is more than can be said for a lot of others.

The characterization of Katniss was excellent. I enjoyed the fact that her shortcomings were realistically portrayed in an endearing way. Especially the way - epitome of show, don't tell, as far as writers' advice goes. The flaws seemed natural, not purposely fabricated to escape Sue-dom, but simply part of who she is. She's a spunky one. (And alright, I may be slightly biased, having slight feminist tendencies at times, seeing as how Katniss is such a strong female lead.) In contrast, there were slight moments of too much perfection coming from Peeta Mellark at times, but viewed from Katniss's narration, these hardly made a noticeable impact.

However, throughout the novel, Peeta's name kept bothering me. And I couldn't figure out why. But now I have - Peeta. Does that not remind you of pita bread? The baker's son? If that was indeed what Collins was going for; ingeniously sly.

Let's face it. Most of us probably have not experienced the things that Katniss and Peeta have; going without food, being beaten for burning bread, and certainly not the Games themselves. Such is the skill of Collins, being able to pull the audience in, allowing them to emphathize with something so different, so remote. Diction choice just had to extra zesty zing.

The premise also brings up a lot of interesting concepts. We have to admit it - with the way media is going nowadays, I mean honestly, reality t.v., there's not a lot of thinking involved. Purely entertainment value, right? Somehow, Collins took this concept, tossed it into a crock-pot with the whole Gladiators concept, and churned out something so deeply thought-provoking. Is our society already headed in such a direction?

And it's not blatantly thought-provoking either; it's one of those novels that creeps up on you, subconciously starting a thought process that continues into conciousness. While being an entertaining read, especially how even in such dire situations, she is able to inject spasms of humour. The Hunger Games is utter brilliance.

I have no idea how I'm going to wait until September 1st for Catching Fire - it feels so far away. I really want an ARC - especially with that ending...

Phew-wee. And I really want to talk about this, without worrying about spoilers. If you've reviewed/read this, drop me a link or comment?
Posted by deltay at 11:05 PM

:) Awesome book, isn't it? I gave it a review on my blog, but I'm not sure I'm so great at giving reviews so it's probably meaningless ramble on my part. :D 4 months and 19 days until Catching Fire comes out if my counting is correct.

I also read the book/reviewed it. However, there is one thing that has always been bothering me ever since I read it: If you were falling from a great distance and there was nothing under you except for the ground, which body part would it be best to land on? Sorry if that was random but that's just really been bothering me!

I want to read Hunger Games, but the one time I saw it, I didn't get it for some reason. I haven't seen it since. :(

HR - It was awesome! Totally adored it :) And don't worry - practice makes perfect ;) It feels so far away...

Iryna - Hmm, that is a pretty interesting question. I'm not too sure, actually. For sure not your head. ;) I would assume either both feet, or like try to spread out the impact a little? idk... *pops over to check out your review*

Great review! I LOVE this book. I don't know how I'm going to wait until September either - the wait is going to kick my ass!

Hehehe Hunger Games = awesome. I've been going crazy about the sequel since August.

As for the link to my review- http://yabookrealm.blogspot.com/2008/08/hunger-games-by-suzanne-collins.html

Review sucks, it was like one of my first ever reviews written. lol

Yours is one of the best reviews I've ever read!

prophecygirl - Thanks! It's definitely going to be a brutal wait - and it's coming out right before school starts.

YA Book Realm - Agreed!
Wow, August - that's pretty much a full year's wait. I think the review's great, thanks for the link :)

Jen - For sure! I actually like the North American version too, but I do agree that some elements of the UK edition are awesome. Especially the artwork!

I'm here to assure you that you are definitely not the last to review this - it took me just as long to read it as it did you! =D

And LOL @ the pita bread reference. I thought I was the only one!!!

This is an excellent review. Thanks for directing me to it!

everyone keeps saying how magnificent katniss is. but i felt she was a real b***** at the end. Peeta helped her that whole time and she justs shoves it right back in his face and leaves him crushed. She didnt even regret it. But it was a good book.

pita bread- so true. and also, Katniss could be a derivation of Katherine, right? Gale with Gabe? Peeta with Peter?

Mockingjay... SUCH a terribly sad book :(
However, I think it was a good ending... Minus what happened to Prim.

Peeta = bread ... good catch. And Gale as in gale wind? Katniss was the girl on fire (he fans her flame?) I wonder if this was deliberate as well.

I think the idea behind the books is excellent but she could have presented it in a much more interesting way. The writing was kind of pathetic and I sometimes wished she had gone into more detail.

It reminds me a bit of "Battle Royale," in that kids are selected at random and forced to compete in a well publicized battle-to-the-death, to prove a point and keep kids in check and whatnot.

Other than that though, the details are stunningly original. I'm constantly on the look out for intelligent, meaningful books to get my students to read, and this candidate just bleeeew me away.

Sorry for the stupid question. What is the best search engine http://google.com or http://yahoo.com?

MASTERPIECE? Please, I beg of you to read William Faulkner and reconsider your post.

MASTERPIECE? Please, I beg of you, read some William Faulkner and reconsider your post.

If, from disease or accident, you are in a "persistent vegetative state" (meaning you cannot communicate, dance, walk, run, eat, bathe, clothe yourself, etc.), Connecticut law allows you to determine whether you want to remain in that condition. Each state has its own laws, so you need to know the laws in your home state or any state that you visit frequently.