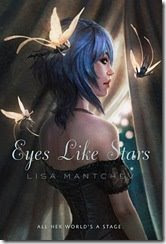 Eyes Like Stars by the superduper Lisa Mantchev was released on July 7th, 2009. Having already earned numerous rave reviews, this is definitely one to check out.

In honour of the release, Vania of Reverie Media and Shelly of Write for a Reader are hosting an Eyes Like Stars Extravaganza to celebrate! Pop on over to join in the fun. In the meantime, here's my contribution to the festivities:
Congratulations, Lisa Mantchev!

So, I actually made this a few days ago, and believe it or not, it actually took all day, on and off. The stage frame was painted in acrylic paint, and then sealed with Mod Podge. Puppets were sketched, inked, coloured, sealed, and then affixed to popsicle sticks. And then came the filming and voice recording. After that, the syncing and editting in Windows Movie Maker - man, that program has a personal grudge against me or something! So of course it decides to not save. And since it was on a Vista desktop, the project file then wouldn't open on my XP laptop. Alas, two days later, finally got it worked out.

Unfortunately, I realized today that I kind of screwed up the genders of Bertie's sidekicks. Cut me some slack though, please - haven't had a chance to read the book yet, although I definitely will have to very soon!