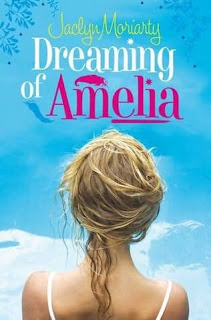 This is the story of Amelia and Riley, bad kids from bad Brookfield High who have transferred to Ashbury High for their final year. They've been in love since they were fourteen, they go out dancing every night, and sleep through school all day. And Ashbury can't get enough of them.

Everyone's trying to get their attention; even teachers are dressing differently, trying to make their classes more interesting. Everyone wants to be cooler, tougher, funnier, hoping to be invited into their cool, self-contained world.

But they don't know that all Amelia can think about is her past -- an idyllic time before she ran away from home. Riley thinks he's losing her to the past, maybe even to a place further back in time. He turns to the students of Ashbury for help, and things get much, much worse.

In the tradition of the gothic novel, this is a story about ghosts, secrets, madness, passion, locked doors, femmes fatales, and that terrifying moment in the final year of high school when you realise that the future's come to get you.

So don't quote me on this, but I think Dreaming of Amelia may be being released earlier in Australia (& the UK?) than [North America]. Either way, still a couple months away.

Why is this week's pick Dreaming of Amelia? I'm glad you asked. In April of 2009, I actually had the great fortune of getting to interview the fabulous Jaclyn Moriarty (interview can be found here), which was quite an honour. It was one of my earlier interviews, from back when Lucid Conspiracy was still merely a fledgling blog, and Jaclyn Moriarty is an author whom I've admired for a long time now, so I was quite happy that she was willing to take time out of her busy schedule to answer my questions.

And if you haven't been exposed to her books yet, you simply must be - immediately! I particularly enjoyed The Year of Secret Assignments. So it's definitely great that there's another installment coming soon in the Brookfield-Ashbury chronology. (Especially since this latest addition may have been alluded to in the interview?)

So there you go - now that you've seen my pick, what are you waiting on, this Wednesday?

*WoW is hosted by Jill over at Breaking the Spine
Posted by deltay at 12:05 AM

Labels: Dreaming of Amelia, Jaclyn Moriarty, meme, The Murder of Bindy Mackenzie, The Year of Secret Assignments, Waiting on Wednesday

The book sounds intriguing. I must search for her other books on Amazon.