Epitaph Road - David Patneaude
*March 23rd, 2010 EgmontUSA
2097 is a transformed world. Thirty years earlier, a mysterious plague wiped out 97 percent of the male population, devastating every world system from governments to sports teams, and causing both universal and unimaginable grief. In the face of such massive despair, women were forced to take over control of the planet--and in doing so they eliminated all of Earth's most pressing issues. Poverty, crime, warfare, hunger . . . all gone.

But there's a price to pay for this new "utopia," which fourteen-year-old Kellen is all too familiar with. Every day, he deals with life as part of a tiny minority that is purposefully kept subservient and small in numbers. His career choices and relationship options are severely limited and controlled. He also lives under the threat of scattered recurrences of the plague, which seem to pop up wherever small pockets of men begin to regroup and grow in numbers.

And then one day, his mother's boss, an iconic political figure, shows up at his home. Kellen overhears something he shouldn't--another outbreak seems to be headed for Afterlight, the rural community where his father and a small group of men live separately from the female-dominated society. Along with a few other suspicious events, like the mysterious disappearances of Kellen's progressive teacher and his Aunt Paige, Kellen is starting to wonder whether the plague recurrences are even accidental. No matter what the truth is, Kellen cares only about one thing--he has to save his father.

With an innovative and intriguing concept, David Patneaude poses some very interesting and thought-provoking questions in Epitaph Road. 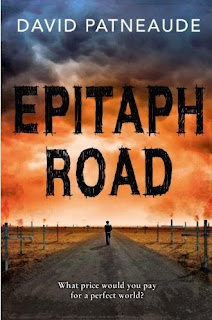 Nowadays, gender equality isn't an issue that [we] think about on a daily basis. But in history - and even presently - male dominance has driven society. Imagine this - a future where 97% of the male population has been wiped out, a society where females govern, a seemingly idyllic place. Dystopian fiction often has a satirical flavour, erecting hypothetical futures or taking one (flawed) feature of society and exaggerating it. With Epitaph Road, Patneaude has woven a very interesting potential future.

World-building is definitely one of the fortes of Epitaph Road. And interwoven with that is a nail-biting little mystery and a mind-blowing conspiracy. One of the cool things about Epitaph Road is the way it keeps you guessing. Just when it seems the characters have gotten the conspiracy figured out, another curve ball is tossed into the mix. Keeping the reader guessing is always great.

Some of the core requirements of good dystopian are originality and creativity. In addition to a great premise, the whole concept behind Epitaph Road is quite cool, as are the little epitaphs themselves.

Once the story got going, it was chockful of pretty action-packed adventure. The beginning exposition was a little slow-going to wade through though. In terms of characters, they were all interesting, but could've used a little more fleshing out, as they are kind of hard to relate to.

I gave you a virtual Easter basket. Go here to see it.

Thanks for the insightful and thoughtful review! I'm glad you enjoyed EPITAPH ROAD!

I loved your blog. Thank you.