Across the Universe Review 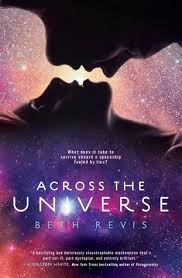 Seventeen-year-old Amy joins her parents as frozen cargo aboard the vast spaceship Godspeed and expects to awaken on a new planet, three hundred years in the future. Never could she have known that her frozen slumber would come to an end fifty years too soon and that she would be thrust into the brave new world of a spaceship that lives by its own rules.

Amy quickly realizes that her awakening was no mere computer malfunction. Someone-one of the few thousand inhabitants of the spaceship-tried to kill her. And if Amy doesn't do something soon, her parents will be next.

Now Amy must race to unlock Godspeed's hidden secrets. But out of her list of murder suspects, there's only one who matters: Elder, the future leader of the ship and the love she could never have seen coming.

Last August, I posted about the trend towards longer books these days in YA. At almost 400 pages and larger than standard size, Across the Universe falls into the heftier category. And like I've said about a lot of longer books - it's unnecessarily so. The beginning was kind of slow and dragged a little. I actually took a break of a few weeks after the first two hundred pages, but then yesterday I picked it back up. And man, were the last two hundred pages ever amazing! It's unfortunate that the beginning didn't quite carry the same momentum.
Honestly, Across the Universe just has so much going for it. To start off with, the silhouette effect and stars on the cover are simply gorgeous. The world that Revis creates is amazingly realistic - the emotions are almost tangible, the descriptions practically transport [the reader] onto Godspeed [the ship] along with the characters. The characters - especially the leading MCs - are very interesting people. Yes, people - because they feel real, and after you finish the book, they feel like people you know, rather than characters made of words on a printed page.
I also absolutely loved the plot twists in Across the Universe. Sure, there were some that a more cognizant reader would be able to figure out (some before the characters do) - but then there are still so many more surprises left over. We, the audience, are like Amy - encountering the strange, contained world on this ship for the same time, constantly discovering new things.
One of the key aspects of truly successful dystopian literature is to be thought-provoking, to challenge stigmas and turn those preconceived notions upside down and inside out. Revis does that phenomenally with Across the Universe. In the vivid world on-board Godspeed, expected norms are challenged, boundaries are pushed and humanity is questioned. There's social satire, there's political critique, there's strategical intrigue...
In short, Across the Universe is a brave read. It isn't afraid to be controversial, to push the boundaries of "acceptability" in society. It optimally utilizes the vessel of dystopian fiction to satirize society today and provoke long and hard thinking.
For those seeking dystopian literature with a little more substance, a little more depth, a little more edginess, Beth Revis caters perfectly with Across the Universe.
Posted by deltay at 8:32 PM

Labels: Across The Universe, Beth Revis, dystopia, Penguin, review, YA

I left my copy on the train *just* as I was getting into it. I have to get another copy! I have not heard one bad thing about this book. The start did seem a tiny bit slow but the opening chapter gave it a real push.

Oh no, that's a real bummer! This is definitely a book worth getting again to finish though :)