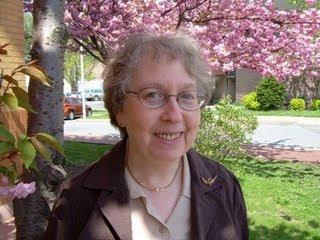 YA science fiction - especially speculative &/or dystopian stuff, seems to be a rising market at the moment. And today, we have an interview with a pretty cool YA author who's been writing some sci fi lately. You may have heard of her - she's the author of Life As We Knew It, The Dead and the Gone, and coming soon, This World We Live In. So without further ado, presenting: Susan Beth Pfeffer!
Let's start off with something fun. Your latest book, This World We Live In, is coming out soon. Summarize the book in twenty words - while tossing in as many alliterations as possible.
Lonely life. Laughter lingers. Longing looks. Loathing loses. Lust. Lying. Love lasts.

Very impressive - every single word! The Moon books seem to contain an element of speculative science fiction. Why this particular hypothetical future? How did these concepts come about?
I've always been intrigued by the fact that the moon controls the tides. And I wanted a worldwide disaster that wasn't the fault of human beings (as so many things are) or something humans could change (since my main character was a teenage girl, and unlikely to save humanity). I also favored what I called a rolling disaster, one bad thing leading to another and another.

So I nudged the moon a bit closer to earth and tried to figure out just how bad that could make things. I have a basic sense of gravity, and I figured the moon's gravitational pull could cause all kinds of miseries.

Which, thanks to me, it did.

Definitely original! Life as We Knew It, The Dead and the Gone, This World We Live In - all rather eloquently phrased titles. How did they come about?
My editor, or someone at the publishing house, named Life As We Knew It. My working title had been In The Sunroom.

Once I came up with the concept for The Dead and The Gone, I knew that would be its title. I zipped on over to Amazon to see if there were any other books with that title, and while there were a number of Dead And Gone(s), there weren't any The Dead And The Gone, so I figured I was safe.

When I was trying to come up with the title for the third book, someone commented on my blog that the first two were five single syllable word titles. So I played around with various combinations until I came up with This World We Live In. Amazon didn't show any serious conflicts, so that became my choice.

That's smart, checking titles on Amazon first. Now, you've accumulated quite an impressive list of publications over the years. Is there one particular book you enjoyed writing more than the others?
I had a wonderful time writing all three moon books. I love the set up and the characters. When I wrote LAWKI it didn't have chapters, and I think when I wrote d&g, I was reminded to put chapters in. Even with TW, the chapters were an organizing ex post facto addition.

I love writing books without chapters. There's something liberating about not having to deal with that structure.

I wrote a book a long time ago called Courage, Dana, for younger readers. I remember really enjoying writing it. A tiny section of it is used on standardized reading tests, so I still make a little bit of money from it.

That's really cool that it's used for testing! If you could meet any character from any of your books, who would you chill with for a day? What would you guys do?
I introduce a new character named Charlie in This World We Live In. He's your basic all purpose nice guy, and I think I'd enjoy spending time with him.

Since I mostly write for kids, I mostly write about kids. In real life, I tend to hang out with grownups. So I think Charlie would be the one I'd have the best time with.

I have no idea what we'd do though, since I only know him after the world has come to an end. That cuts down considerably on possible activities.

Haha, that probably would. If the apocalypse were coming tomorrow and you could only choose three books (in the entire world) to keep safe and bring into the "New World", which ones would you pick?
Agee On Film by James Agee.
Bartlett's Familiar Quotations
Church, State, and Freedom by Leo Pfeffer (my father)

Words of wisdom - what do you do when the muse has gone on vacation?
I go on vacation also.

I do a lot of pre-writing, so I always have some comfort level about what I'm going to be writing from one day to the next.

If I wake up in the morning with a big I Don't Wanna, I simply give myself the day off.

It doesn't happen often, but I respect it when it does.

Wise words. When writing, do you have any specific rituals?
I try to clean my home before I begin a book, have things all nice and tidy at least at the getgo.

And generally, I don't read fiction when I'm writing.

For the most part, I don't outline on paper. But before I begin writing a book, I do an enormous amount of thinking about it. And when I'm writing, I focus on what's going to happen.
I'm a very fast worker. I always have been. But the pre-writing lets me cut down on the rewriting, since I've worked out most of the problems before I start putting words on paper (or on screen).

There's no right way or wrong way, and in the end it probably takes the same amount of time as it would if I sat down and improvised.
But my favorite part of writing is working the story out, and I always wait until I'm comfortable with the beginning, have a very strong sense of where the story is going to end, and am reasonably confident I know the middle, before beginning the actual writing.

More great advice! Really on a roll here. (And from peachiemkey of TWFT): What's one hard truth you've had to learn about writing?
That just because I think something is wonderful doesn't mean anyone else will.

I am my own biggest fan. I write the stories I would most enjoy reading. My primary goal in writing is to entertain myself.

Alas, not everyone else on earth has my exact taste.
Anything else to add?
Just that I'm very glad the world isn't anything like the one I created in my moon books and that I don't have to hang out with imaginary characters!

Thanks for joining us!
Posted by deltay at 4:52 PM

Labels: Interview, Life as we Knew It, Susan Beth Pfeffer, The Dead and The Gone, This World We Live In, writing, YA

Nice interview! She seems very down to Earth, especially for someone writing about the moon.

Haha at Samantha's comment ^. Nice interview with such a venerable author!

Love the 'three books' question...and great time for that interview, too, I just started reading the first book.

Hi! Would you mind if I share your blog with my myspace group?
There's a lot of people that I think would really enjoy your content.
Please let me know. Cheers

Hello, I want to subscribe for this blog to get latest updates,
so where can i do it please help.

Your mode of describing all in this piece of writing is truly good, all be able to without difficulty understand it, Thanks
a lot.

Great post. I was checking constantly this blog
and I am impressed! Very useful info particularly the last part :
) I care for such information a lot. I was looking for this particular info
for a long time. Thank you and best of luck.

Paragraph writing is also a fun, if you be
familiar with then you can write or else it is difficult to write.